I was sent this news clipping, begging a comment… 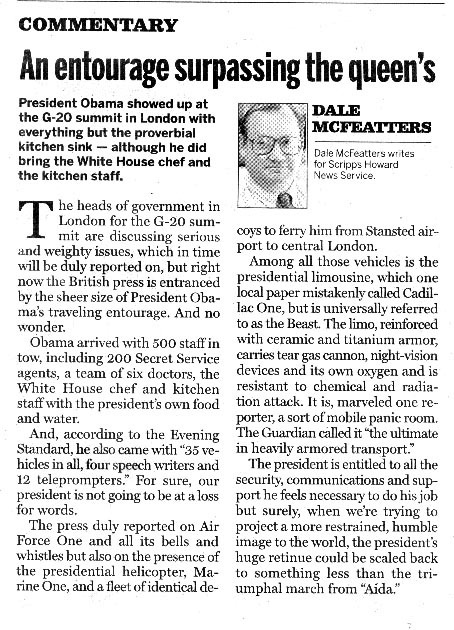 And my response was:

Care to guess how many accompanied George Bush on HIS first trip to Europe in June 2001?  NY Times reported somewhere between 750 and 900.  Where are those monsters of journalistic integrity – Limbaugh, Hannity, Beck, Coulter, Megyn Kelly, and of course, the mighty Bill – now?  Why aren’t they crying foul that President Obama is undermining the presidential image (I mean more than they usually cry) by downsizing the entourage?

Per Col Mark Tillman, the only pilot of Air Force One for both of his terms, Bush43 took 1675 flights in AF1, more than 200 per year.  Cost per hour of flight for AF1 appear to range from $40-58K.  And AF1 never travels alone – they fly with three C5 Galaxies ferrying that armored limo and other vehicles unless it’s just a small jaunt to Crawford.  Average cost per year for that eight years was $185M of taxpayer dollars.

Now, I’m not saying the numbers quoted in the article above weren’t excessive, if true.  I was only able to find anti-Obama sites and the Guardian reporting it, but the 500 still appears to be fewer than his predecessor.

And we shouldn’t forget how much his predecessor spent and wasted on all those trips to Crawford when he had a perfectly good and MUCH more secure vacation spot in Naval Support Facility Thurmont (Camp David).  How many more Secret Service are required for a private residence than a military installation?  Plus, it’s cheaper to get to Camp David by Marine One than to fly to Texas by Air Force One.  Somehow, that never seemed to come up on the Hannity Comedy Hour.

It probably won’t interest anyone else to know this, but, recognizing that a president never really is  on vacation…as far as that goes, it seems Bush broke Reagan’s record for days away from the office in 2005, with 3.5 years left in his term.

So comparing the Democrat work ethic to Republican work ethic:

Bottom line – memories of past (recent?) extravagances and what some might call abuses as a privilege of the office are pretty short.  Which is why it is funny that a $26K trip to NYC got such attention; yet more than that was spent in just 30 minutes in the air on just one of the 77 trips to Crawford.

With the exception of the unconfirmed entourage numbers for Obama and Bush, the rest should be verifiable.

I wonder if Michael Shermer’s book “Why People Believe Weird Things” should have been titled “Why Do People Believe Weird Things” because it is more an exploration than an exposition. Well-researched and documented, the extensive bibliography alone is worth a look.  There is no one answer for all in these pages, because the range of weird beliefs encompasses the gamut of paranormal, alien abduction, religion, etc., each of which must be addressed in a different way.  It is important to understand two things about Shermer’s approach in this book:  he defines a “weird thing” as “(1) a claim unaccepted by most people in that particular field of study, (2) a claim that is either logically impossible or highly unlikely, and/or (3) a claim for which the evidence is largely anecdotal and uncorroborated”, and he pointedly writes in several places that he is not trying to belittle the person or beliefs, but trying to understand.   Shermer is an accomplished skeptic, but more important than that, he is a scientist and science historian and brings that research background to the matter at hand.

I am always amazed at Shermer’s prodigious reading capacity and diagnostic skills.  Shermer distills tremendous amounts of information into usable bites. In one chapter, he describes preparing for a debate with Duane Gish (of creationist movement fame) by reading all of Gish’s published material as well as re-reading the entire Bible.  I don’t know that I could stomach more than one of Gish’s books.   It is interesting to note Dawkins and Gould both would have tried to dissuade Shermer from agreeing to the debate, not because they were afraid he’d lose, but they refuse to put non-science on the same stage as science.  By debating, they feel that at least one someone in the audience would take away from the event the idea that creationists and IDers actually had a right to sit at the table of science.  Shermer debated many of the “weird” in the late 80s and early 90s; I’m not sure if he still does.

The book opens with a discussion of the importance of science and skepticism and provides a list of 25 reasons of why we may be wrong about things.  Subsequent sections and chapters address specific “weird” beliefs to numerous to list.  The Holocaust denial discussion is a good example of how to refute that which most of us feel shouldn’t need refutation.  History is a particularly challenging body of knowledge, for rarely, if ever, is it recorded without prejudice.  Still, rational reasoning can be applied.  He explains the principle arguments posed by the deniers, and spends an entire chapter illustrating convergence of data to support the commonly understood accounting of the events of the Holocaust.

Another good section addresses the most common creationist/IDer counter-arguments to evolution and the fallacies…  While neither exhaustive nor particularly detailed, it nonetheless does give cocktail party talking points.

Shermer’s original conclusion as to why people believe weird things was in itself unsatisfying to me.  He gives four broad reasons, and the one that makes the most sense, yet is the least defensible is “because they want to”.  In the second edition of the book (the one I read), Shermer adds a chapter on why smart people believe weird things.  I don’t think he really answers that question.  He does explain that smart people are better at defending the beliefs they arrived at in a non-standard fashion.  Further, smart people view their own beliefs as being based in logic and reason, yet they attribute the same beliefs in others to emotion.  Telling.  It is amusing to see and hear pedigreed scientists decry the pseudosciences and yet not see their own errors.

Shermer continues his study in two follow on books: How We Believe and The Science of Good and Evil.

Review of “Intelligent Thought: Science versus the Intelligent Design Movement”

This is not the silver bullet that can be used to dispel IDers, nor is it anti-religion if you are looking for that. It is a collection of 16 essays from true scientists (evolutionary biologists, physicists, psychologists, philosophers, paleontologists, and more) who have joined to respond to the claims of Intelligent Design and the absurdity of calling it science. There are other, more detailed books on the matter, but some of the essays are from different perspectives than the normal refutations.

In addition to those that explain why ID is not science, there are essays on why Darwin rejected design, evidence for evolution, and one describing why the product of evolution is more unintelligently “designed” leaving the believer of ID to try to explain why things such as the so called irreducibly complex human eye is such a poor design.