“A Quality Instinct” in practice

Extraneous observation to share before I get in to the topic of the day: Having interviewed several times in the last six years, I have determined that going through the process with a current employer for a new position is harder than going in cold to a prospective employer. The challenge of trying to dispel some existing impressions while reinforcing others…? Tough. But that’s a story for another day…

Anyway, after reading and writing about The Quality Instinct last week, I tried to use Max Anderson’s five features when looking at a few exhibits last Sunday. Dylan and Drew had a class at the Dallas Museum of Art (DMA)and I went off on my own to test my new knowledge on Loren Mozley and Greek and Roman artifacts. After their class, Andrea, the boys and I all toured three current exhibitions: Chagall: Beyond Color, The Body Beautiful in Ancient Greece: Masterworks from the British Museum, and Cindy Sherman.

Of course, Andrea and I had differing opinions. And this piece today is about my opinion…

Features of Quality In Art

As noted in my last post, Maxwell Anderson offers five features to look for when looking for quality in art:

Admittedly, to get good at this with respect to art I think I’d have to read a lot more on the subject than I have. Given my currently very diverse interests, I don’t think that will happen soon (at least with respect to art) as I don’t want to limit myself to the time it would take to gain some mastery over that one subject.

So I went to the museum to look at art armed with my notebook, “the list” and a sincere effort to keep an open mind. I didn’t apply the metrics to the Greek and Roman art – even a novice could see the quality in each piece. If your are in the Dallas area, I do suggest the British Museum exhibition of Greek and Roman art – there were some amazing pieces. I did walk away with questions on some of the other exhibits.

One thing I didn’t mention in that last post was that Anderson suggests not reading the card next to the painting/sculpture…at least not at first. You should take in the art on your terms…try to understand it, absorb it, experience it…before you read what someone else wrote about it. That’s harder than it sounds. My eyes are attracted to the encyclopedia entry so I can add to the database. He’s right, though; it does get in the way of appreciating the piece on its own. 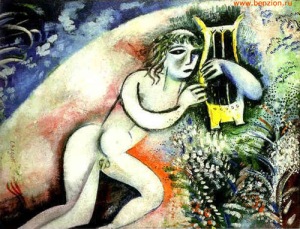 I’ll start with Marc Chagall. Pretty much nothing he created after 1917 is in the public domain, so if you want to get some idea of his works, I suggest just googling him. The DMA exhibition Chagall: Beyond Color showed me that the man was so much more than a painter: sculptor, ceramicist, stained glazier, costume designer for a ballet…really quite diverse. Now, applying the five feature evaluation…

So, by the criteria, Chagall’s work is (mostly) quality. And I didn’t like any of it. The ceramic pieces reminded me of something we made as kids – draw a picture with colored markers, send it off and you get back a plastic plate as a present for Mom. Imagine the backlash for me saying that: “Philistine! Cretin! Uncultured!” But it is what I think.

Another section featured the photography of Cindy Sherman. The exhibition Cindy Sherman is large, with impressively large pieces – some of which are not intended for children. Read the DMA description and you’ll see words and phrases like “groundbreaking”; “postmodern photography”; “[t]hroughout her career, Sherman has presented a sustained, eloquent, and provocative exploration of the construction of contemporary identity and the nature of representation…” (yes, I know…don’t read the card…)

What exactly does “postmodern” mean? Can it really be used in any contemporary context? I’ve always struggled with that phrase, whether in art, literature or even architecture. Isn’t “modern” now? How can anything “now” or “yester-now” be “post”-now? A rabbit hole named digressions calls me…so, back to the features:

Okay, so she meets all the quality features as suggested by Anderson. I’m still not impressed. I never got a sense for what she was trying to create. For me, it was a bunch of pictures of her in costumes and I did not like very much of her work at all (here’s the differing opinion – Andrea thought she was brilliant). I’d say some of Sherman’s work is definitely warped, but that begs another question: Does bizarre composition automatically punch the “art” card?

Before we toured the three traveling exhibitions, I went alone to a small one featuring Loren Mozley, titled Loren Mozley: Structural Integrity. Mozley was at the University of Texas at Austin for 37 years where he taught art to an awful lot of students.

Even though I’m not big on landscapes, or pretty much any southwest-themed art, I liked what I saw in there. My notes (yes, I took notes!) tell me I saw “details without details”. Stepping back, one could see the overall picture, but up close there were blocks of color in most of the art on display (not the picture to the right). I saw precise lines on one side of the block strokes and blurs on the other side. And the geometric arrangement added order to his disordered presentation.

What does is say about me that I could pull those observations from Mozley, but not Sherman or Chagall? Biases at work I guess, with a touch of curmudgeon.

Over the centerpieces of the exhibit, the DMA had a quote from Mozley that I liked:

To me the world is confusing, but ordered and alive. I do not distort for fun, rearrange, so much as try to see, and sometimes discover, something of an elusive rational order pervading the universe.

An “elusive rational order”…why elusive? Surely he didn’t mean dark matter or the Grand Theory of Everything? Doesn’t matter…I liked his stuff anyway.

I haven’t figured out why two personalities keep directing the search engines my way, but traffic is traffic, right? Lately, Stephen Hawking seems to be the number one search term, but Robert Anton Wilson still gets the page looks. I guess there are quite a few people who are interested in his Quantum Psychology. I wrote a pretty detailed deconstruction two years ago which still draws hits, although most readers probably won’t like what I had to say. That particular analysis took a lot of time and effort. I read Wilson’s books so that I could counter the specious arguments of a fan of his on another web site. I’ll never get that time back, but if it brings visitors to the musings, then great!

Why can’t Marvel find a screenwriter with a triple digit IQ? (Okay, they found one, but Joss Whedon must have cut his in half to make The Avengers.) I expected Iron Man 3 to be better than Iron Man 2 – I mean, it had to…that was a really dumb and not a very good movie – but who knew it would be worse? People tell me that liking the comic books helps to appreciate the movies. Okay, but they spend a huge amount of money on effects…would it hurt to add a little intelligence to the script? Are they afraid they’ll lose their audience? If that’s who they are catering to, then why completely destroy the canon (as I’ve come to understand, apparently the villain in 3 was less than nothing like the villain in the comics.) Now, I think Robert Downey Jr is a fantastic actor – and he made The Avengers worth watching, but …

I do have a Beer of the Week, but I’ll save it for next time. Enough for now…keep looking for the quality.