I received an uncorrected proof from the publsher Greystone Books through LibraryThing. I finished this on a return flight from vacation two weeks ago and had to sort out my plethora of sticky notes! 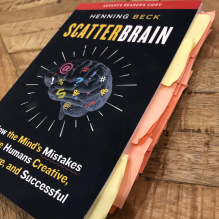 Now, I’ve developed a habit of checking the notes before reading non-fiction. If there are none, I tend toward reading it as more opinion than not. If there are, but are not cited in the text, my opinion of the author is diminished – that’s lazy and irresponsible (on the author’s part, not mine) yet sadly increasingly common.

And then there is Dr. Beck, who opens his notes section in a novel way: “You can google data. If you are really good, you can google information. But googling knowledge is quite a bit harder.” Beck is a degreed neuroscientist who gives public talks on the subject of this book, the brain “flaws” that give us our creativity. I don’t know if he’s always been this way or if the talking changed him, but this book is written with a style and approach that makes it easy to impart to the reader what he’s saying. That’s not to say there is not depth and detail…just that Beck presents them well. The entire book is one to three page soundbites; large enough to encapsulate the micro-topic and small enough to capitalize on the brain’s short attention span.

Beck looks at fourteen “so-called brain blunder”s and explains why they aren’t at all: forgetting, learning (why we’re bad a rote learning), memory (a false memory is better than none), blackout (choking under pressure), time (misjudging it forges valuable memories), boredom (hard to turn the switch off), distraction (which leads to more creativity), mathematics (best calculations don’t involve numbers), decisions (we risk much yet still manage to choose wisely), selection (choosing is hard), pigeonholing (biases can help, and of course hurt), motivation (“inner critic limits us”), creativity (doesn’t happen on demand), perfectionism (can’t improve without mistakes.) There, in a nutshell, that says nothing. Dr. Beck cites the biology behind his points and the studies that support those points. It’s not burdensome at all and quite enlightening. He consciously emphasizes the good things about the brain’s fallacies (“Even biases have their good sides – if you use them correctly,”)

Now…sticky notes (some of which are for me to look up or follow up)… Beck talks about his neighbor who is “a truly extraordinary character”, and who happens to be two years old. That neighbor (who makes appearances throughout the book) is “a pretty clever guy with the ability to master things that would bring any supercomputer to its knees.” He is constantly making little mistakes. “Every mistake, every imprecision is an incentive for him to try it differently next time and maybe even to get a little better.” It occurred to me that I’ve never thought of our learning process as Bayesian (Beck doesn’t put it that way.)

Subtitle for Forgetting is Why You Won’t Remember the Contents of This Book – Thereby Retaining the Most Important Information. Counter-intuitive but he goes into wonderful detail on why rote doesn’t work and we shouldn’t try to force it. We need to walk away because the brain needs time to dynamically combine information. “If you sort your information too early on, it’s much harder to put things into a different kind of order later down the road.”

Learning – “[…] information stored in a brain is not located in any particular physical location but is rather an ever-changing state of mind.” Constantly rewritten, which is why no memory is accurate.

Memory – on the difference between an orchestra playing a score and a brain, which “doesn’t play the order of notes as they are written on the score but instead alters the melody a little bit each time it practices.” Memory is not fixed. Ever. Memory retrieved is subject – and vulnerable – to the influences at the time of retrieval. Studies demonstrate that memories can be altered by peer pressure and “participants were no longer able to distinguish between truth and fiction.” Some, namely jeenyuses, are better at that than others.

In general, every one of our memories is false and, each time we recall one, it becomes even more false.

Blackout – “Secret Formula for Fending Off Stage Fright”. Beck says a better solution than preparing calculations for a test is “to combat the anxiety directly by simulating the pressure-situation in practice, thus growing accustomed to it.” When I prepared to take the Professional Engineer license test, two four hour sessions of forty questions each, I did so by laying out my books and notes as I would on test day. And I’ve coached others to do the same – muscle memory goes a long way. Instead of freaking out looking for an index or a certain book…I already knew where it was!

For example , if we are concentrating on reading a book while simultaneously wondering about a strange look that a colleague gave us earlier in the day, it is going to be hard to remember the text. Perhaps something like that already happened to you while reading this chapter. You may have been reading along and then suddenly realized that your thoughts were somewhere else entirely, But whereas this might make the average author feel sad or distressed, I personally feel happy to hear it. Because it shows that your own thought-journey function is working beautifully.

This. All the time.

On distraction, the brain is wired to filter. “[…] the importance of a piece of information is not determined by its contents but rather by its variation.” I am distracted easily (unless I don’t want to be). I rely on distraction to help organize tasks, memories, thoughts I have. Sounds opposite, but not for me. Beck thinks it is a problem to not allow ourselves to be distracted. He says “[c]reative people allow themselves to get more easily distracted because their filter mechanisms do not work as well as those of other, less creative people.” Or, perhaps they work exactly well?

Decisions – “Our brain’s goal is not to be happy but to become happy.” “Becoming happy is always a little bit nicer than being happy.” And unhappy people are the world changers – we don’t like uncertainty.

Selection – another section I’d read of in other books, we don’t do well when we have a lot of choices. Beck said his local market in Germany has…”about 118 different varieties” of muesli! He notes the chain Aldi limits the different number of each product. Shopping is much easier when we don’t have to sift hundreds of options. To avoid “the agony of choice”, Beck offers five tricks: Narrow your goal, Be satisfied (my note: close enough is often good enough), decide important things with your gut (still not on board with that myself…but that’s for Kahneman’s book…), resist the excess (you don’t have to make a decision for every option), and up the pressure (get off the pot, so to speak.”

Pigeonholing – have to always be alert to avoid the trap of stereotyping. Stereotypes are necessary for our brain to function well, but we have to make sure we don’t create false correlations. We look for patterns, connections, and we overinterpret them when we find them.

Motivation – how many of you are familiar with the marshmallow study? Children told they can have one marshmallow now, or two if they wait. One famous 1970s study found years later that those who waited were more successful, wealthier, better educated, etc. Well… “There is one important factor that is often left out when people refer to this Marshmallow Test: the children who participated in the experiment came from a privileged circle of society (they were largely the children of professors and scientists at Stanford University […])” A repeat of the experiment in 2016 with poorer children discovered the exact same neural mechanisms that influenced the 1970s children to wait influenced the 2016 to eat the marshmallow now. They “must be able to afford the luxury of holding back.” Lightbulb. I like Beck’s addressing demotivational techniques that are passed off as motivational – “employee of the month”, pay for performance… I think formal performance evaluations are demotivational.

Creativity – autopilot is often the best way to be creative. And forced breaks help. Struggle with a problem for a while and walk away for a bit. Isaac Asimov said in his memoirs that he never had writer’s block because he had so many writing projects going on at once. If he got stymied by one, he’d shift to another and couldn’t help but take a break from the one threatening to block him.

Perfectionism – avoiding mistakes can obviously be a good thing, but “just because you don;t make a mistake does not necessarily imply that your are right.” Keep that in mind. Chaos is beneficial – Spock would cry to know that “[i]f our brains were to switch to a logical system of thought, we would lose our mental flexibility entirely.”

So…soundbites from soundbites, hopefully enough to spark an interest. Excellent book that I’ll revisit after I loan it to a couple of people.

Note to the publisher:
– page 161, second paragraph, “Sometimes people sayz that they think they are…” Deliberate typo? Beck has a deliberate misspelling on page 173, but doesn’t mention this one.
– page 218, middle of last paragraph: “protein-fat-ration” should be “protein-fat-ratio”?

View all my reviews

Foiled again by the partial review “save” demon…losing everything to, maybe this time, the void. So…reconstructing…life and a holiday interrupted the reading of this – it’s an easy read and the differential from start to finish dates doesn’t reflect that. I got a review copy of the first in this series (Legacy), after seeing in the description “Steampunk, Fantasy” and I did not think it had much of either, but the author told me that she added more as the series progressed. And that she did. Ramped up the steampunk and the fantasy in this one. Half a world away from the origins of the stories allows some creative turns.

When we last saw our protagonist, he was leaving merry old Europe for a new life in Hawaii with a new wife and an old family (read the stories…I’m not spoiling). We pick up the story as they stop in Sonora, Mexico…but not the Sonora of 1843 that we know. As I said, Ms. Lowe ramps up… probably more appropriate to say gears up … the steampunk element. At the same time, the fantasy takes yet another turn (again…read the stories… or someone’s synopsis if you’re of the TLDR sort) or three.

Side adventures abound; plot twists evoking a 1930s cliffhanger serial vibe at times to me; more hints as to the primary title in the series – but only hints…must needs read the rest to find out everything, I’m guessing.

Warning to parents: along with the steampunk and fantasy ramping, the quite adult content of a few small passages is also ramped. Minimal, but present.

View all my reviews